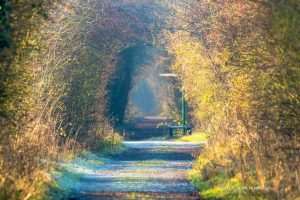 In the late 70’s early 80’s I would go fishing and hang out around  Oakhill and the brick ponds and the areas in-between, like many kids did back then – I remember it like yesterday spending most of the school summer holiday there. Myself and my brother used to be members of the BRSA fishing club which at the time had Oakhill pond as one of the venues, one day whilst fishing we caught a 20lb pike.  Fishing is no longer permitted at any of the ponds, as these are now conservation areas.

I now work overseas, only getting  the chance to come back home every now and again so I haven’t been to Oakhill for many years, knowing I was coming home for the Christmas and New Year holidays I went onto the friends of Oakhill web site to check it out, I was very surprised with the site and info on it clearly I could see from the web site the changes made, looking forward to seeing it for myself when I came home I joined there and then using the simple online membership form. 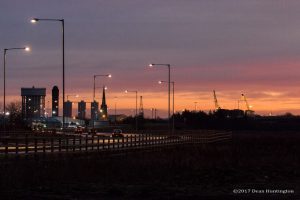 The view of Goole from Oakhill Carpark, By Dean Huntington

One morning at the end of December I woke up bright and early before sunrise and after wrapping up well due to the heavy ground frost, I grabbed my camera and headed down memory lane to Oakhill with Jess (The family Dog). When I arrive at the car park just off Tom Pudding way which is a bypass road, also new to me, looking around from the car park and gaining my bearings the first thing I noticed was the expansion of the industrial area this can only be good for Goole in terms of bringing work and business to the area, the next thing I noticed was Potters grange had gone and as kids do’ we use to tell creepy stories about that place. 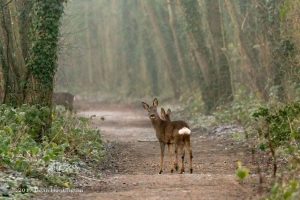 I walked on the gravel road leading me round the back of Tesco’s warehouse then up onto the old railway embankment, now I knew where I was and remember it well, walking up to the railway gate and crossing the rail track, on closing the gate I must have startled a stoat and it ran across the path in front of me. Just ten yards further, I could see the changes made, the pathways and signage leading me to Oakhill pond were well maintained and still in keeping with the wildlife and surroundings, just before I arrived at the pond I was met by three Roe deer’s that had leaped out of the trees and woods that lined the paths. Arriving at Oakhill and walking on the pathway around the pond stopping to take photos from the platforms and large viewpoint over the water, I also made use of the benches that had been placed around the pond to rest and just observing the wildlife.

After spending some time around Oakhill pond end of the reserve I made my way along another route leading me towards the canal and past the meadow down to the brick ponds every step I made a saw something different. It’s unbelievable how much it’s changed since I was a boy – The place is so clean and tidy, paths with clear directions for visitors to walk and enjoy the wildlife the introduction of nesting boxes and cleverly cultivated areas to attract certain species its outstanding what hard work the volunteers have done to make this outstanding reserve . 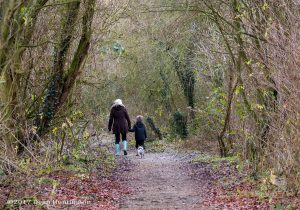 A winters Walk, By Dean Huntington

I returned again the next day with my wife and grandson, who now loves the place and he tells everyone at school he’s been to the “deer park”… ahh bless him!

The volunteers deserve a big thank you for everything they have done; they have given Goole and the people a magical place to visit.